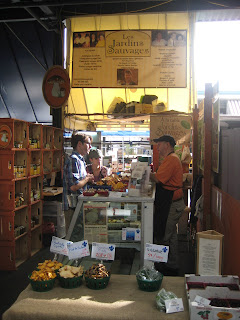 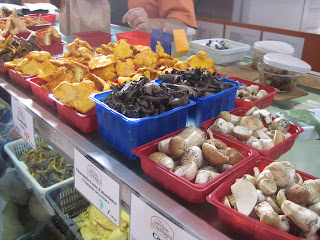 Fig.2. A large variety of mushrooms and a few other surprise
Some foragers I’m acquainted with have informed me that this is a great year for wild mushrooms, especially with the cool damp mornings of late.
Mushrooms are fungus, which is a word that carries a somewhat bad connotation, especially when one thinks of feet.  People who love fungus, and like foraging for them, are called, Mycophagists, which is also a funny word if only because it sounds like it has nothing to do with mushrooms.
For the best selection of wild mushrooms in Montreal, I go to Les Jardin Sauvages in the Jean Talon Market.  I’m always amazed at the selection, and owner Francois Brouillard will be more than happy to regale stories of his farm and discuss fungus with anyone who will listen.  Les Jardin’s porcinis are fat fungus this year, and very flavorful.  The most interesting specimen however, is hands down a mushroom called Vesse du loup.  It resembles a football size marshmallow, white on the inside and light as a feather.  I was told that this mushroom need simply be pan fried on both sides, and drizzled with a little olive oil and vinegar.
Mushrooms are a lot like women in the morning, scary in appearance, but once you clean them and dress them up a little, they become things of beauty.  Of course, it also depends on the woman, and the mushroom.  All that to say, don’t be scared of how they look. 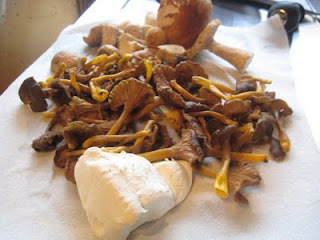 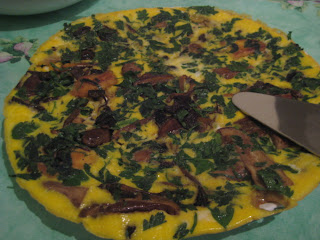 Fig.4. Wild mushroom frittata.
This omelet is on the plain side purposely so you can properly taste the mushrooms.  Adding Parmesan or olives will take away from the fungal flavor.  Clean mushrooms with a damp paper towel and never under running water; and those small worms sometimes found in fresh porcinis will not harm you, look at them as protein.
Ingredients:
3 tbsp olive oil
1 cup porcini mushrooms, cleaned and halved
1 cup chanterelle (or any mushroom or your choice)
1/2 cup chopped fresh parsley
5 eggs
Salt and pepper to taste
Directions:
Heat the olive oil in a large, non-stick pan set over medium heat.  Add the mushrooms and cook until wilted, about 8 minutes.  In a medium bowl, whip all of the eggs together until combined and just frothy.  Pour the egg mixture evenly to the pan (make sure the pan is not dry, if it is, add a bit more olive oil.)  Lower the heat to medium low, sprinkle with parsley, and cook until the frittata sets.  Flip the frittata around and cook the other side, unless you like your omelets slightly runny like I do, then don’t flip it. 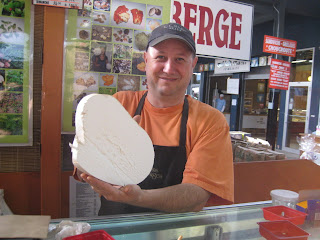 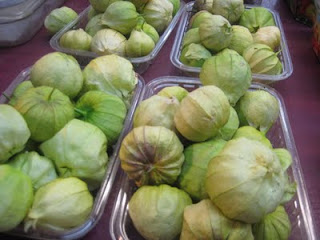 Fig.1. Tomatillos with thier husks on at the Birri Kiosk in The Jean Talon Market.


Tomatillos are fruits associated with tomatoes, and like tomatoes, are part of the nightshade family.  They can be eaten both raw and cooked.  The fruit is surrounded by a thin husk that begins to split open as the green fruit ripens.  The taste of a tomatillo is acidic, tart and full flavored; a mouthful can leave you with puckered lips.
Tomatillos are an integral part of Mexican and Indian cuisine.  In Mexico (as well as most of Central America) tomatillos are used in most green sauces and are poured over tacos, fish, and all types of meat.  In India, tomatillos are used in chutneys.
I like to make sauce with tomatillos, which I then preserve.  There’s a lot of natural pectin in tomatillos, which helps the sauce thicken.  Birri sells tomatillos in small bushels.  Look for fat ones, the husks should look like they’re two sizes too small for the fruit.  I look for the ones that remind me of Danny Devito.
Tomatillo Sauce
Fills about 6 small mason jars
This sauce can be used on everything from beef to fish.  It can also be added to guacamole.  When you remove the husk, you’ll notice that the tomatillo has a slight, slimy texture to it, this is normal and does not need to be washed or scrubbed off.  They are also good raw. 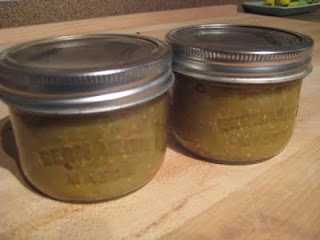 Ingredients:
1 small bushel of tomatillos, halved
3 jalapeño peppers, seeds removed and chopped
5 medium plum tomatoes, halved
Salt
Directions:
Line two large cookie sheets with parchment paper and bake the tomatillos, peppers and tomatoes in a preheated 375 degree oven.  Bake until outer part of the fruit begins to brown, about 25 to 30 minutes.  Remove from oven and let cool.  Add all of the fruit (in batches) to a blender and puree until just broken up. (If you like your sauce finer, puree longer.)  Pour all of the pureed sauce into a large pot and bring to a boil.  Let it simmer for about 10 to 15 minutes and then fill your hot mason jars (I like to put my Mason Jars into the oven until they’re just hot but not too hot.) Seal the jars immediately and cover jars with a kitchen towel.  After a few hours, verify the jars to make certain they all sealed.  If some of the jars have not “pop”, submerge them into a water bath, and, using the canning method, boil water until jar seals
Posted by The Hungry Italian at 9:29 PM No comments: