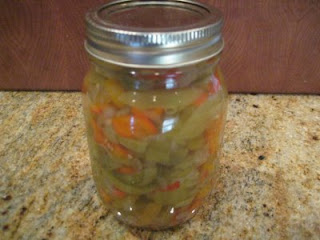 This is for all of you who have a garden in the backyard; don’t let those green tomatoes go to waste, it’s time to preserve. Nothing warms the heart more than a well stocked cold room—food security for those barren cold winter days.
Relish need not simply be resigned to hamburgers. Serve as an antipasto, as a bruschetta, with grilled fish or steak, or over pork chops; the possibilities are endless.
I’ve made relish with carrots, corn, fennel, zucchini, celery and most types of peppers. If you don’t have a garden, go to a farmer’s market and pick up some vegetables. There are still some great deals to be had and it’s a great time to haggle with the farmers.

While stirring, bring the water, sugar and vinegar to a boil. Once the sugar dissolves, add all of the vegetables and bring to a boil once again. Boil for 2 to 3 minutes and shut off the heat. Meanwhile, sterilize your mason jars and lids in boiling water, and, while still hot, ladle the still hot relish into the jars. Seal the jars --making sure not to over-tighten--and cover with a kitchen towel overnight, the vacuum seal will occur as long as the relish and jars are very hot.

This recipe can be done to your liking. If you want it sweeter, add more sugar or less vinegar. If you don't like it sweet omit the sugar all together as we do with some of our preserved vegetables in Italy. Taste the liquid before adding the vegetables. And if you have more vegetables than called for in this recipe, make sure the liquid just covers the vegetables. Also, if you have any fresh herbs in your garden don't let them freeze to death, add them to your relish; tarragon and sage add a wonderful taste to all chutneys and relishes. 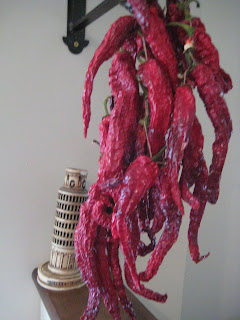 Fig.1. Traditional Calabrese peppers, both mild and spicy, are hung out in the sun to dry. They are best when still chewy. They are eaten raw or fried.

Caught a virus last week and the doctor’s orders were to put my feet up for a few days. It seemed like the perfect opportunity to watch The Sopranos again from the very beginning. After getting through the first season I couldn’t help but notice the frequent food references in every episode, and if there’s one food that’s mentioned more than any other, it’s peppers. Tony and his crew eat them raw, fried and pickled, and mostly in sandwiches. Among the more frequently mentioned panini are: peppers and eggs, vinegar peppers with capicollo, and of course, the classic peppers and sausage. As far back as I can remember, sausage and pepper sandwiches were a staple, the peppers were either roasted or fried.

Fig.2. A fun American Italian cookbook with recipes such as baked ziti, Sunday "gravy" (tomato sauce) and of course, peppers and eggs sandwiches

Roasting peppers is an annual tradition in most Italian households. The peppers are roasted on a barbeque until the skin chars, after which they are peeled, stored in freezer bags and frozen. Roasted peppers will easily keep in the freezer for up to a year.
Frying peppers simply requires a pan, some olive oil, and of course, fresh peppers; and they don’t get any fresher than what’s available right now. I’m not going to lie to you, frying peppers is nasty business. As soon as the pepper makes contact with the hot oil the sound and splatter will bring any seasoned cook to attention. 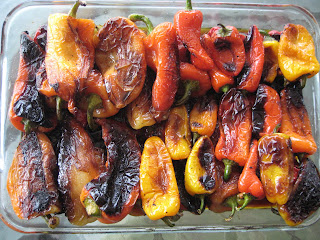 The splatter of oil droplets leaping out of a hot pan is a phenomenon every Italian is familiar with: it’s known as “schizza”, which loosely translates to splatter or spray. As kids, we were always warned about the dreaded schizza upon entering the kitchen. Many good eats produced the hand scorching droplets: bacon and eggs, eggplants and pizze fritte (fried dough made with raisons, anchovies, or salted cod around the holidays) are but three dangerously delectable delicacies produced in a hot fry pan; my Mother shielded us from this assault by placing a paper napkin over a three hundred degree pan of hot oil.
If third degree burns on your hands aren’t your thing, might I suggest simply freezing the peppers? If peppers are frozen while still fresh they will retain their taste and texture for months. Just slice them into strips and store in a freezer bag removing as much air as possible. The next time you roast a chicken or rabbit just add the frozen peppers and some potatoes along with it.
Buy and preserve your peppers now; they taste and look great, they’re inexpensive and best of all, they don’t need to travel all the way from the Netherlands. Most of the peppers found in supermarkets during the off season are indeed Dutch; help reduce the carbon footprint, buy enough Quebec peppers to keep you going until harvest 2009.
Posted by The Hungry Italian at 7:51 PM No comments: